MEGAtrends in web management you need to know

Web Governance is finally catching-up with online needs, primarily as the result of 4 Megatrends explored below.

Underlying these Megatrends is a realization that if the trajectory of ever improving online experience is to be maintained, a better approach to governance is needed.

As embarrassing as it is to admit it there are still some of us who can recall the early (pre-2000) days of Web Governance.

The main memory I have is just how informal things were back then - with few people, few tools and even fewer rules about what to do.

Yet, in many ways this unsophisticated approach worked fine.

Activity was so simple and volumes so low that all you really needed was a couple of staff with broad skills to run a pretty decent website.

Just as other specialisms like design and content have changed beyond recognition in the past 10 years, so too is Web Governance finally catching-up with online needs - primarily as the result of 4 Megatrends. 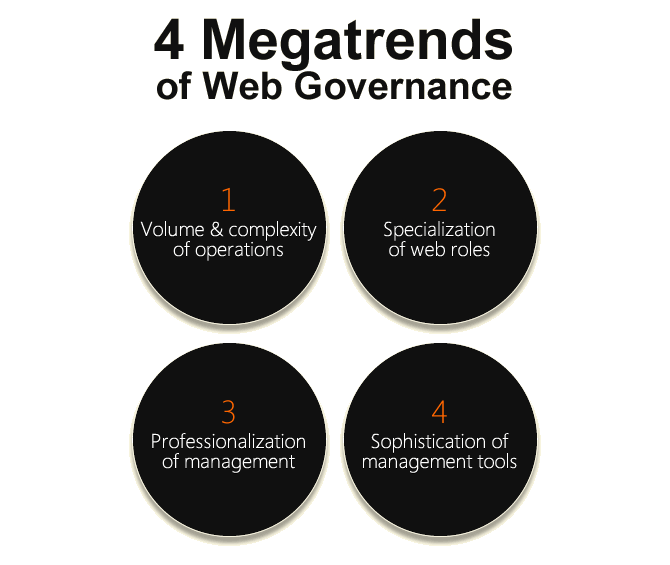 Underlying these Megatrends is a realization that if the trajectory of ever improving online experiences is to be maintained, a better approach to Web Governance is needed.

And not just for aesthetic reasons. The real motivator is competitive advantage.

As disciplines like design and content are gradually exhausted as differentiators, the way in which they are managed will become progressively more important to creating & maintaining value.

However, the problem is that the scale of demands being placed on web teams frequently outstrips their ability to deliver.

As we will now explore in Megatrend 1, the single, greatest challenge in Web Governance is how to re-impose order on the immense scale of online operations.

Megatrend #1: Growth in the volume & complexity of online operations

A decade ago the only thing most web teams had to worry about was a single corporate site or maybe an intranet.

Today, even the smallest organization maintains a wide variety of digital presences (including accounts on Facebook, Twitter, LinkedIn, YouTube, etc.) aimed at a growing assortment of devices (desktop, smartphones & tablets) and each with its own needs for design & content.

The central issue is that this growth in online scale has not been balanced by a corresponding growth in the resources needed to ensure stability.

As a result web teams have to cut corners and bend the rules in an effort to get things done, which predictably impacts on quality.

"Web Governance is Broken" ... Download the infographic that explains all about the imbalances of Web Governance - and how to fix them!


Not only does this put an organization's online reputation at risk but it also creates huge stress for staff - which would be bad enough in itself, but is made much worse by poor leadership.

The truth is that an historic inattention to web management means that many teams have essentially been left to their own devices for long periods.

The result is stagnant and calcified systems of authority.

This increases tension in an already fractious setup due to competing claims over 'who does what'. In the light of the ever growing specialization of online roles explored in Megatrend 2, this reinforces the need for a renewed governance approach.

When I began working in online in '98 anyone with basic HTML, design and content skills could create a pretty decent website.

This seems so quaint now!

Indeed, we have since long surpassed the point of peak geek, where any one person could have a deep working knowledge of every skill set needed to operate a web presence.

What's happened is that—in the race to develop ever more sophisticated websites—almost everything to do with online has fragmented into a series of incredibly niche disciplines.

This makes it essential that roles & responsibilities be sharply defined so that existing staff know what is expected of them and prospective joiners know what they're getting into.

Yet, it is still much too easy to find organizations where job descriptions have barely changed since they were first created a decade or more ago.

This long standing neglect of people management has made the transition to a new way of doing things much harder.

While uncontentious anachronisms may be easily fixed (for example, a Designer who looks after analytics, but wants rid of it), there will also be instances where change is vigorously resisted. For instance, a Developer who wants to retain control of design rather than surrendering it to a new UX specialist.

In fact some wars have been fought with less bitterness than many organizations experience when trying to reconfigure governance.

But, change is inevitable.

The reason is that a new generation of online leaders for whom the web is neither cool nor cryptic is finally being appointed to positions of authority.

They don't need to be convinced about the value of better management. They get it.

As explained in Megatrend 3, all they really want to do is get on with creating the stability needed to focus on online goals.

Part of the reason Web Governance was overlooked for so long is that there were simply too many other issues that needed fixing first—like getting the basics of usability right, implementing accessibility or improving content.

So it is with a sense of synchronicity that just as many of these are being put to bed, a new breed of digital manager is emerging who can do the same for operations.

One useful consequence of the long gestation of Web Governance is that it allowed many techniques to be refined first before being applied in practice. This means that that lots of valuable professional guidance is now available for those who want to undertake digital transformation.

This includes the insights of Didier Bonnet in Cap Gemini, practical examples of governance in action from the UK Government, as well as conceptual models, such as my own Framework of Web Governance.

Of course, none of these are plug and play or can guarantee success. You may have to experiment with several configurations before you arrive at a system that works for you.

The only real requirement is that your online ambition be balanced by an appropriate investment in resourcing.

This means that your team should be able to access all the supports it needs to get the job done - including the right technology, which as we'll see in Megatrend 4 has been one of the great successes of Web Governance in recent years.

From dumb CMS to sophisticated analytics the range of tools available to online managers is quite astounding.

And thank goodness for that.

For without such tools looking after anything like a modern web presence would be well-nigh impossible.

As we know the basic contribution of technology is to automate mundane manual work, thus allowing staff to be put to more useful tasks.

However, web management tools also have another more powerful application.

As well as saving on labor, they also collect reams of data - data that can be cross referenced to reveal detailed operational insights and improve the quality of decision making.

This sort of analysis is particularly welcome on very large sites, where managers may be far removed from the coal face of operations. The challenge such people have is tracking the impact of decisions.

Happily, the arms race of technology is making this easier.

For example, take this as an instance for how a clever use of new tools can help web managers get the most from limited resources.

Imagine you hire two contractors, both of whom supply large volumes of content on an ongoing basis.

In the absence of good data, it would be extremely difficult on a large site to figure out which gives the best value.

There are simply too many pages to manually check everything for adherence to required standards, minimum levels of quality and other rules. 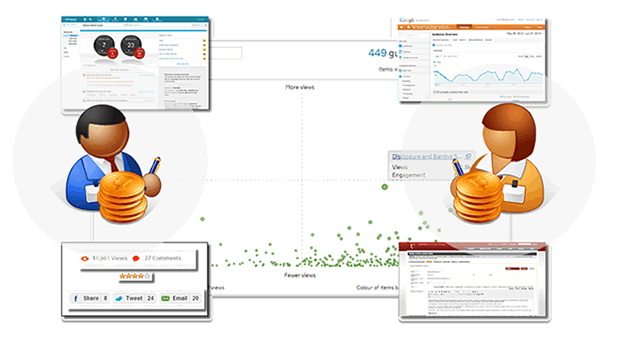 However, the growth in automation means that information can now be gathered from disparate systems (such as CMS, QA checkers, analytics, social media monitors, etc.) and cross-referenced to establish with certainty which is best.

Such an analysis may find that the content produced by, say, Contractor A is:

In contrast, Contractor B (who remember is paid the same for very similar work) produce consistently excellent copy, that has...

In this instance, it's a no brainer to suggest that all spending be completely diverted from Contractor A to Contractor B for best return.

So we see that by triangulating insight from many sources, new management tools can help reconnect decision makers with the impact of their actions.

This represents a first step towards the type of analysis that will one day be commonplace.

Admittedly it is still early days.

There are as yet few vendors who share the data needed to support widespread integration. This means a lot of analysis still has to be done manually, perhaps by importing figures into Excel.

Nevertheless, examples such as the above demonstrate how in the future, success in Web Governance will be key to success online.